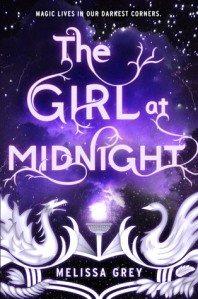 For readers of Cassandra Clare’s City of Bones and Leigh Bardugo’sShadow and Bone, The Girl at Midnight is the story of a modern girl caught in an ancient war.

Beneath the streets of New York City live the Avicen, an ancient race of people with feathers for hair and magic running through their veins. Age-old enchantments keep them hidden from humans. All but one. Echo is a runaway pickpocket who survives by selling stolen treasures on the black market, and the Avicen are the only family she’s ever known.

After scrolling through several pages of Goodreads reviews on The Girl at Midnight, I have to say: I’m not drawing the similarities between Shadow and Bone and this book. After thinking long and hard about it, roughly the only similar thing I can kind of see is the Fold and the inbetween—in this book, they use the inbetween to transport. It’s dark. That’s the similarity.

I loved this book. It took a few chapters to suck me in and get into the groove of it, but once it did, it was fast-paced and enjoyable. I won’t say that it was especially plot-twisty—in fact, it was very predictable.

The worldbuilding was absolutely fabulous. It’s set in modern times on Earth. The Avicen are an ancient race of people who have plumage for hair (often colored similarly to various birds, such as peacocks, magpies, and hawks). The Drakharen are another ancient race of people who descended from dragons—they have a light spattering of scales on their skin. These two races have been fighting for centuries.

The character building was great, too. I really like Echo as a main character—adopted by the Ala when she is seven-years-old (she had an abusive family), she lives among the Avicen as if they are her own people. Her rough childhood makes her human—paired with her resiliency, wit, and bravery, she’s a main character I can relate to and appreciate. My only gripe was her dialogue—perhaps it was because she was raised in a library, but the way she talked to other characters was nowhere near how a seventeen-year-old talks. I found it bothersome and distracting. I did appreciate the random, obscure words that she would say and explain the definition of.

The book is dark, bloody, and intense. I am very excited for the second book to come out—it was difficult to write this review without revealing any important details, so take my word for it: it’s excellent. I rated it a 4/5 on Goodreads—it lost a star for the predictability and Echo’s dialogue. I would definitely recommend it!

One thought on “The Girl at Midnight by Melissa Grey”