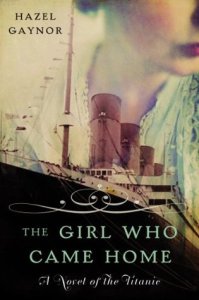 A voyage across the ocean becomes the odyssey of a lifetime for a young Irish woman. . . .

Fourteen members of a small village set sail on RMS Titanic, hoping to find a better life in America. For seventeen-year-old Maggie Murphy, the journey is bittersweet. Though her future lies in an unknown new place, her heart remains in Ireland with Séamus, the sweetheart she left behind. When disaster strikes, Maggie is one of the few passengers in steerage to survive. Waking up alone in a New York hospital, she vows never to speak of the terror and panic of that fateful night again.

Adrift after the death of her father, Grace Butler struggles to decide what comes next. When her great-grandmother Maggie shares the painful secret about the Titanic that she’s harbored for almost a lifetime, the revelation gives Grace new direction—and leads both her and Maggie to unexpected reunions with those they thought lost long ago. – Goodreads

For as long as I can remember, I’ve been obsessed with the Titanic and the Oregon Trail. No clue why. This was on sale, so I snagged it.

Did you read those Dear America books as a kid? I did. I loved them and it was my first venture into historical fiction. Of course, I only liked the historical events I was interested in, but still. This book kind of made me nostalgic for those.

Let me get my least favorite parts out of the way – way too many damn points of view. I could not care less about Grace Butler, who seemed to only serve as a glimpse into Maggie’s future. And the random other characters on the ship (I honestly can’t remember their names) who fell flat for me. It felt like random fluff with no actual substance.

Other than the fluffy additional points-of-view, I enjoyed the book. It was a dramatic view into what the events aboard the Titanic may have looked and felt like for a young woman. There was a little bit of a love story woven in (though nothing crazy) and the story moved at a good pace.