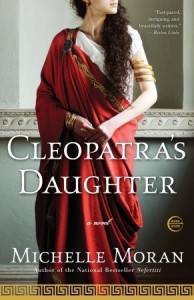 At the dawn of the Roman Empire, when tyranny ruled, a daughter of Egypt and a son of Rome found each other…

Selene’s legendary parents are gone. Her country taken, she has been brought to the city of Rome in chains, with only her twin brother, Alexander, to remind her of home and all she once had.

Living under the watchful eyes of the ruling family, Selene and her brother must quickly learn how to be Roman – and how to be useful to Caesar. She puts her artistry to work, in the hope of staying alive and being allowed to return to Egypt. Before long, however, she is distracted by the young and handsome heir to the empire…

When the elusive ‘Red Eagle’ starts calling for the end of slavery, Selene and Alexander are in grave danger. Will this mysterious figure bring their liberation, or their demise? – Goodreads

I have pretty mixed feelings about this book. On one hand, I’m a biased, loyal Michelle Moran reader who adores reading historical fiction about Ancient Egypt.

On the other hand, this one definitely wasn’t my favorite.

One thing I typically love about Moran’s books is the strong sense of connection to the main character. I found that I didn’t really care about Selene that much. Sure, I appreciated the fact that she was smart and cared about her studies, whereas other women were only interested in parties (I identified with Selene a bit there), but that was where it ended. I had a difficult time with believing their emotions when they were sent to Rome and how quickly they bonded with the people there.

Many of the characters fell flat and were obnoxiously predictable. Actually, much of the story was predictable, down to the identity of the Red Eagle, which was a pretty big plotline.

I was also a bit sad at the lack of romance. There was some, but not a lot. Mostly the love interests annoyed me.

It was an okay read — I read it in Mexico and finished it in a day, but I definitely recommend Moran’s other books more. I rated this a 3/5.