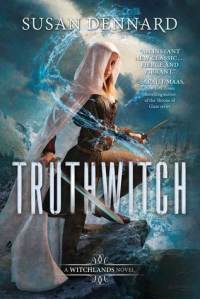 In a continent on the edge of war, two witches hold its fate in their hands.

Young witches Safiya and Iseult have a habit of finding trouble. After clashing with a powerful Guildmaster and his ruthless Bloodwitch bodyguard, the friends are forced to flee their home.

Safi must avoid capture at all costs as she’s a rare Truthwitch, able to discern truth from lies. Many would kill for her magic, so Safi must keep it hidden – lest she be used in the struggle between empires. And Iseult’s true powers are hidden even from herself.

In a chance encounter at Court, Safi meets Prince Merik and makes him a reluctant ally. However, his help may not slow down the Bloodwitch now hot on the girls’ heels. All Safi and Iseult want is their freedom, but danger lies ahead. With war coming, treaties breaking and a magical contagion sweeping the land, the friends will have to fight emperors and mercenaries alike. For some will stop at nothing to get their hands on a Truthwitch. – Goodreads

Just when I was starting to get gripey about the lack of wonderful suck-you-in-and-don’t-let-you-go-until-you’re-done fantasy YA — this sucker jumped out and got me.

I literally hermit-ed myself away in my room and didn’t talk to people just so I could read this. I even tried to draw it out over the course of several days to minimize my book hangover. It didn’t work.

The premise and description of this book sound kind of lame, but don’t let that sway you. It was awesome. In this world, some people are born with witch abilities. Some witches can manipulate fire, water, or wind. Some can see people’s lifethreads (the threads that signify how people are feeling and who they are). Other witches, like Safi, can sense when someone is telling the truth. The bad guy is a Bloodwitch, and he basically can track you once he smells your blood. Also, his eyes turn red. So naturally I pictured him as Darth Maul.

There’s a treaty, people are out to snatch up Safi (because knowing whether or not someone is telling the truth is pretty damn handy), there’s war, mystery, sexual tension, and all of that fun jazz.

I liked how the love angle was played in this. It wasn’t instalove, and there was certainly tension. It didn’t develop quickly, which was a nice change.

The worldbuilding was fantastic. I can still vividly picture Merik’s ship, the forest, the villages—the description was just right.

I honestly can’t stop gushing about this. I thought giving myself some time between reading the book and writing the review would make me calm down, but the hype is there for a reason. Pick this puppy up. Adding it to my favorites and giving it a 5/5.