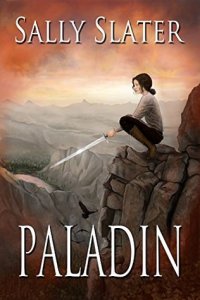 Brash, cocky, and unbeatable with a sword (well, almost), Sam of Haywood is the most promising Paladin trainee in the kingdom of Thule… and knows it. The only problem is that Sam is really Lady Samantha, daughter of the seventeenth Duke of Haywood, and if her father has his way, she’ll be marrying a Paladin, not becoming one.

But Sam has never held much interest in playing damsel-in-distress, and so she rescues herself from a lifetime of boredom and matrimonial drudgery. Disguised as a boy, Sam leaves home behind to fight demons-—the most dangerous monsters in Thule—-alongside the kingdom’s elite warriors. Pity that Tristan Lyons, the Paladin assigned to train her, is none other than the hero of her childhood. He hasn’t recognized her–yet–but if he does, he’ll take away her sword and send her packing.

Sam is not the only trainee hiding secrets: Braeden is a half-demon with a dark past that might be unforgivable. Whether he can be trusted is anyone’s guess, including his.

As demons wreak havoc across the land, rebellion stirs in the West, led by a rival faction of warriors.

A war between men is coming, and Sam must pick a side. Will saving the kingdom cost her life–or just her heart? – Goodreads

I took a hell of a long time to write this review—why? Because I loved this sucker so much.

Look, I’m no stranger to the fantasy YA scene. In fact, it’s my poison of choice. Tamora Pierce, JK Rowling, Sarah Maas, Ursula Le Guin…I’m not going to list more because you get the idea. I love them.

Paladin reminded me of Tamora Pierce’s Alanna series—but honestly, only because of the female-posing-as-male-to-kick-ass aspect. The actual concept of the Paladin was new to me, and I appreciated that.

Paladins are demon fighters. That’s pretty much it. They literally train to kill the demons that have infested their land. Throw in some politics and rebellion and boom—you’ve got war and intrigue.

I loved the romance aspect of this book. It was very subtle, no instalove—just love between two friends. It developed slowly and naturally and didn’t overshadow the actual plot. Sam also maintained her badassness, which seems to be a trait that falls away when two characters fall in love.

The character development was fantastic! I felt like I really knew Sam by the end, and I also loved Braedon. I would have liked to get to know more about Tristan, so there was some development left to be desired there.

The worldbuilding was also great, and I felt that I could picture every demon they came in contact with, every pub, every bit of scenery. It was wonderful, and really nailed it.

Overall, I couldn’t put it down and I absolutely loved it. This gem is super cheap on Amazon, so go pick up a copy! You won’t regret it. I rated it a 5/5 and added it to my favorites shelf.