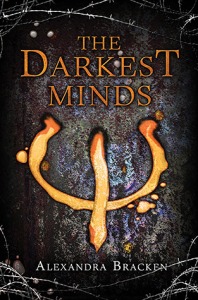 When Ruby woke up on her tenth birthday, something about her had changed. Something alarming enough to make her parents lock her in the garage and call the police. Something that gets her sent to Thurmond, a brutal government “rehabilitation camp.” She might have survived the mysterious disease that’s killed most of America’s children, but she and the others have emerged with something far worse: frightening abilities they cannot control. – Goodreads

The Darkest Minds (Book One)

Love, love, loved it. In fact, I couldn’t put it down! I’ve meaning to read this for months but didn’t want to shell out $9.99 for the Kindle version. It finally went on sale so I picked it up…I definitely do not regret it.

Ruby is the main character and the story is narrated in first-person from her point of view. In a time where kids are dying of an uncurable, mysterious disease and others are showing up with odd “powers”, the government has begun to seize children and keep them in camps—essentially concentration camps—where they’re beaten down, removed from their parents, and forced to conform and keep their powers secret.

Ruby is an Orange—a telepathic. She can see other people’s memories and even erase them. She’s scared of her abilities, so she keeps them hidden. When she’s smuggled out of camp (after staying there for SIX years) by a group claiming to be good guys, she realizes that adults can’t be trusted in the new world.

I really enjoyed Ruby as an MC—though scared and traumatized, she’s strong and willing to fight for her survival. She protects those around her and is kind to those she loves. The love interest was done well in this book—no instalove, despite the insta-attraction (which totally happens in real life). The secondary characters were also constructed well—Liam, Chubs, Zu—which added to the story.

I also LOVED the worldbuilding. There was a bit of an information dump in the first chapter, with the virus and ability mutations and fall of the government, but it was fairly easy to absorb and continue with. The new state of affairs in the US is described well, especially when they’re driving through empty and beaten down towns.

I rated book one a 5/5 on Goodreads and added it to my Favorites.

The opening was a bit jolting and took me a chapter or two to fully understand where the hell I was at on the timeline and what happened. And then I was horrified.

As with the first book, the worldbuilding was great. The plot really picked up in spots but was slow. as. heck. in others.

I had so many feels during this book. In fact, I KEPT getting in the feels, so thanks, Bracken, for toying with my emotions.

Definitely a good second installment, which kept me rolling right into book three.

In The Afterlight (Book Three)

I absolutely loved this ending. All of the loose ends were tied, and I ACTUALLY felt satisfied. For the last 40% of the book I started to get upset because I didn’t want it to end.

The final installment was an amazing mix of emotion, pain, heartbreak, love, triumph, evil, corruption…ugh. I loved it. I laughed. I cried. I got angry. I was disgusted. So many emotions. All of the feels. I can’t give anything away because you have to read the first book!

This series has been so, so good. I’ve been in a reading slump for so long, but this kicked me out of it. This final book was also a 4/5—it was a bit slow in parts.

One thought on “The Darkest Minds trilogy by Alexandra Bracken”