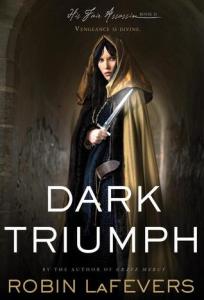 I’ve already posted a review of Grave Mercy, but I felt the need to follow up with a review of His Fair Assassin sequels.
The second book, Dark Triumph, was released last year. Mortal Heart, the third, was released last month. Naturally, as soon as I finished Grave Mercy, I seized these (well, downloaded them from Amazon) and read them within a plane ride and a half (and then some).
The second and third books do not focus on Ismae, but on two of her convent sisters.
The second book follows Sybella, who is the daughter d’Albret, a major player in the first book. I won’t spoil his role and background for you, because I really recommend reading Grave Mercy. D’Albret is basically a giant, evil jerk—which gives him a lot of credit. Sybella is an extremely deep, damaged character. She had so many layers and mysteries, I definitely felt like I was on the rollercoaster of emotions with her. While dealing with lustful, incestuous siblings, 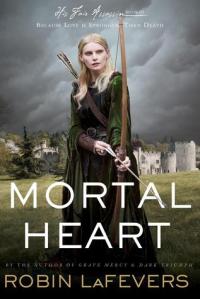 murderous family members, and a whole slew of other issues, Sybella’s assassin/spy assignment from the convent is to watch over her treacherous family’s holding.
The third book is from Annith’s point of view. Annith was raised in the convent, but is the last of the girls to be sent on assignment. In fact, the abbess of the convent has decided to make her a seeress—aka the least exciting job at the convent when you’ve been raised to kill people your whole life. Instead of moping around and accepting orders, Annith leaves the convent to create her own destiny.
I absolutely loved these books, as they built off of the first in the series and gave an all-around view of what was happening during the storyline of the first book. The only thing that threw me off was the timing—the second and third books both start several weeks or months behind the first book, so it takes a few minutes to orient yourself as to where you are in the timeline.
I highly recommend this series. It’s a definite 5/5 in my book!

One thought on “His Fair Assassin: Dark Triumph and Mortal Heart by Robin LaFevers”