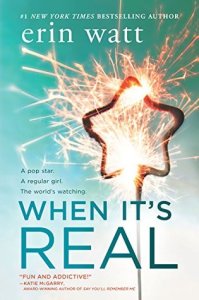 Meet Oakley Ford-teen celebrity, renowned pop star, child of famous movie stars, hottie with millions of fangirls… and restless troublemaker. On the surface he has it all, but with his home life disintegrating, his music well suddenly running dry, and the tabloids having a field day over his outrageous exploits, Oakley’s team decides it’s time for an intervention. The result: an image overhaul, complete with a fake girlfriend meant to show the world he’s settled down.

Enter seventeen-year-old Vaughn Bennett-devoted sister, part-time waitress, the definition of “normal.” Under ordinary circumstances she’d never have taken this gig, but with her family strapped for cash, she doesn’t have much of a choice. And for the money Oakley’s team is paying her, she figures she can put up with outlandish Hollywood parties and a team of publicists watching her every move. So what if she thinks Oakley’s a shallow, self-centered jerk? It’s not like they’re going to fall for each other in real life…right? – Goodreads

You know how you’ll be reading a book, and it’s really good, and someone asks what you’re so absorbed in? So you lie, because the real answer is embarrassing? Because you don’t want to admit you’re a 27-year-old reading a chick lit about some regular girl who falls in love with a pop star? Yeah, that happened to me twice while reading this.

I’d rather admit that I like dragons than admit I was reading a book with the tagline of “a pop star, a regular girl, the world’s watching”. BUT, I actually really enjoyed this fluffy, light, unbelievable-but-whatever-I-needed-a-light-summer-read book.  It reads like a show from the Disney channel, complete with an orphan and some fairytale stuff.

Vaughn Bennett is seventeen, “normal”, poor and orphaned. Her slightly older sister takes care of Vaughn and her two younger twin brothers, which is no cheap feat after her parents die in a tragic accident. Somehow, they afford to live in Southern California. I let this slide.

Vaughn’s sister works for a publicist of the famous Oakley Ford, whom I pictured as Justin Bieber…like, pre-weird JBeebz. You know. “Girlfriend” JBeebz. My imagination, I do what I want.

Justin, er, Oakley, has a garbage reputation of being a player partyboy in Hollywood, when he just wants people to take his music seriously. So, his publicist hires Vaughn to be his fake girl-next-door girlfriend to repair his image. Vaughn gets a paycheck (don’t worry, there’s no creepy prostitution stuff here; it’s just an image thing) and they go on fake dates.

I actually liked the slow build of their friendship and eventual non-fake romance. I liked each character, and surprisingly, didn’t want to gag at Oakley’s disdain of the limelight. I liked Vaughn’s character; she was punchy and independent.

It was a nice, light read this summer. I finished it quickly and actually enjoyed it. The story was sweet and the characters were well done. If you’re in the mood for a very lighthearted romance, pick this one up. This does fall in the genre of new adult, so probably not appropriate for younger kiddos.

One thought on “When It’s Real by Erin Watt”