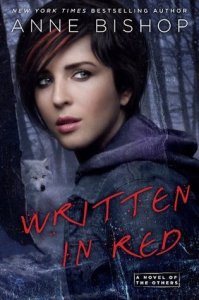 As a cassandra sangue, or blood prophet, Meg Corbyn can see the future when her skin is cut—a gift that feels more like a curse. Meg’s Controller keeps her enslaved so he can have full access to her visions. But when she escapes, the only safe place Meg can hide is at the Lakeside Courtyard—a business district operated by the Others.

Shape-shifter Simon Wolfgard is reluctant to hire the stranger who inquires about the Human Liaison job. First, he senses she’s keeping a secret, and second, she doesn’t smell like human prey. Yet a stronger instinct propels him to give Meg the job. And when he learns the truth about Meg and that she’s wanted by the government, he’ll have to decide if she’s worth the fight between humans and the Others that will surely follow. – Goodreads

This…it’s seriously a contender for my top favorite series of 2017. Sure, it’s only June, but still…I loved this series. I read books 1-4, so this review is for the entire series. It’s a little difficult to cover an entire series, so bear with me.

The books are written in third-person, which allows the reader to get a glimpse into everyone’s emotions and views. This was especially handy because each, er, species of individual views humans (or Others) differently.

My favorite part of the entire series were the characters — everyone, no matter how small, was developed well. Though Meg was extremely annoying with her naive nature and almost juvenile ways, it made sense with her upbringing. Throughout the series you can see Meg grow and become stronger. Simon also changed dramatically throughout the entire series.

The underlying romance plot is light and is almost an afterthought. Without giving too much away, I found myself subconsciously BEGGING the author to make some sparks fly or something. PLEASEPLEASEPLEASE.

Anne Bishop is a great writer — I was completely enveloped in the world she had crafted. If you enjoy fantasy fiction, seriously, do yourself a favor and pick this up.