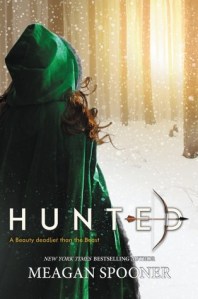 Beauty knows the Beast’s forest in her bones—and in her blood. Though she grew up with the city’s highest aristocrats, far from her father’s old lodge, she knows that the forest holds secrets and that her father is the only hunter who’s ever come close to discovering them.

So when her father loses his fortune and moves Yeva and her sisters back to the outskirts of town, Yeva is secretly relieved. Out in the wilderness, there’s no pressure to make idle chatter with vapid baronessas…or to submit to marrying a wealthy gentleman. But Yeva’s father’s misfortune may have cost him his mind, and when he goes missing in the woods, Yeva sets her sights on one prey: the creature he’d been obsessively tracking just before his disappearance.

Deaf to her sisters’ protests, Yeva hunts this strange Beast back into his own territory—a cursed valley, a ruined castle, and a world of creatures that Yeva’s only heard about in fairy tales. A world that can bring her ruin or salvation. Who will survive: the Beauty, or the Beast? – Goodreads

This book was beautifully written — I couldn’t put it down. I’m a sucker for a fairytale retelling and this one was one of the best I’ve read.

Yeva is beautiful — almost obnoxiously so, as the book kept referring to it (my only qualm with the story). Yeva doesn’t want to settle down and get married — she wants to spend her days outdoors, hunting like her father. When her father goes crazy hunting for a creature in the woods, Yeva decides to track the creature as well.

I enjoyed Yeva’s character. She was deep, I could connect with her, and I truly cared about her. I also like the Beast’s character — though the “plot twist” was super obvious, I enjoyed his story and how he came to be.

The world was constructed well — I could picture the castle, the woods, the dogs, everything. I enjoyed the magical elements and how the parallel magical world played into the “real” world.

I can’t say too much more without giving it away — if you enjoy fairytale retellings, definitely give this one a shot. I rated it a 5/5 on Goodreads and added it to my favorites shelf.