Top Ten Books Which Feature Characters Who ARE really good at being bad!

1. Snape from Harry Potter – Believe it or not, I actually loved Snape by the end. We were all conditioned to hate him (unless you were a Slytherin). Those of us who did hate him felt extremely guilty by the end.

2. Raffe from Penryn & The End of Days – Seriously, I never thought I’d be into the bad boy angel thing…until this.

3. Pensatucky from Orange Is The New Black – Okay, so maybe the show version of Pensatucky is funnier and crazier…but the book version is pretty nuts, too!

4. Captain Randall from Outlander – I can’t even express how much I hate this guy. This villain makes this book. Not only is he the thin link between Claire and her modern day life…he’s a creepy rapist who really enjoys making others feel pain. Ick, ick, ick.

5. George RR Martin from Game of Thrones – Okay, so maybe Martin isn’t technically a character. But the villains he creates are total spawns of satan. Geoffrey? Cersei? Need I say more than Lannister? And honestly, Martin kills EVERYONE you ever care about in this series, so, hey…maybe he is a villain. 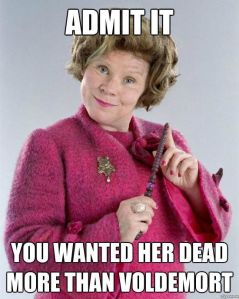 6. The Study Series by Maria V. Snyder – DUH. Valek is the BEST bad guy and definitely my favorite. He’s not necessarily a bad guy to Yelena after the first book, but he is to everyone else for sure.

7. Harry Potter and the Order of the Phoenix by J.K. Rowling – Professor Umbridge is such a good bad guy (girl). I am 100% being her for Halloween (I know this so far in advance because my best friend throws a Halloween party every year and this year’s theme is Superheroes & Super villains.) She was way worse than Voldemort!

8. The Pretty Little Liars series by Sara Shepard – I know I’m not a huge fan of these books, but A is such a creepy, creepy villain. Following the Liars, spying on them, knowing their every move and keeping them on their toes constantly? Definitely a good bad guy.

9. The Hunger Games by Suzanne Collins – President Snow is TERRIFYING!!

10. Snow Like Ashes by Sara Raasch – the villain in this book (I’m being vague so as not to give away the twistiness) and the details of him/her are so good and totally not the normal story line that you get in fantasy books. I cannot rave enough about the book itself, but the way Raasch wrote every character, including this one, is just astonishing.

Top Ten Tuesday is a weekly feature hosted by the Broke & the Bookish. Check out more Top Ten features on their site.