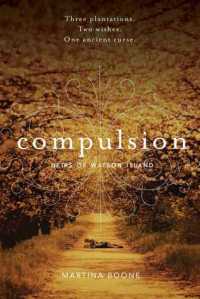 All her life, Barrie Watson has been a virtual prisoner in the house where she lives with her shut-in mother. When her mother dies, Barrie promises to put some mileage on her stiletto heels. But she finds a new kind of prison at her aunt’s South Carolina plantation instead–a prison guarded by an ancient spirit who long ago cursed one of the three founding families of Watson Island and gave the others magical gifts that became compulsions.

Stuck with the ghosts of a generations-old feud and hunted by forces she cannot see, Barrie must find a way to break free of the family legacy. With the help of sun-kissed Eight Beaufort, who knows what Barrie wants before she knows herself, the last Watson heir starts to unravel her family’s twisted secrets. What she finds is dangerous: a love she never expected, a river that turns to fire at midnight, a gorgeous cousin who isn’t what she seems, and very real enemies who want both Eight and Barrie dead – Goodreads

Oh. My. Word. I am SO happy that Compulsion is the first book in a series (even though the next book doesn’t come out until October) because I finished this book wanting so much more. If i could stay in Barrie’s world forever, I probably would!

Now, my opinion on this book may have a little (or a lot) to do with the fact that I’m missing Louisiana and my family down there BADLY right now, but I absolutely loved the entire story – there’s romance, some fantasy and a dash of mystery all thrown in together which is basically the perfect combination in my book!

I read a review on Goodreads that said it’s like a ‘slow burn’ and that’s exactly right! While you shouldn’t read this book if you’re looking for action right off the bat, you definitely should if you want some of the most amazing writing I’ve ever read. Never have I been able to picture everything so vividly, again, that may have something to do with my “homesickness”, but I truly think it has more to do with the way Martina Boone writes.

Barrie is definitely a character I can relate to, but there are definitely times that I just wanted to smack her (doesn’t that always happen though?). She very much needed to start listening to her intuition instead of blowing it off, and the instances in which she knew what her gut was telling her but chose to ignore it are the ones that I hated the most. As readers, we obviously have a very objective view and know what the characters SHOULD do, but they generally don’t because… well, that’s what makes the story so good.

I gave Compulsion 5/5 stars on Goodreads and I’m sending my copy in a care package to my little sister in Louisiana – I can’t wait to hear what she thinks!