Alexa Hollen is a fighter. Forced to disguise herself as a boy and serve in the king’s army, Alex uses her quick wit and fierce sword-fighting skills to earn a spot on the elite prince’s guard. But when a powerful sorcerer sneaks into the palace in the dead of night, even Alex, who is virtually unbeatable, can’t prevent him from abducting her, her fellow guard and friend Rylan, and Prince Damian, taking them through the treacherous wilds of the jungle and deep into enemy territory.

I bought Defy for two simple reasons: I follow Sara Larson on Instagram and enjoy her posts, and it has a sword on the cover. Shallow and blind, but true. I didn’t even read the summary.

So I plunged forward, wincing when I realized it was another girl-posing-as-a-boy-soldier-oh-no-nobody-knows story. I paid cold hard Amazon cash for it, 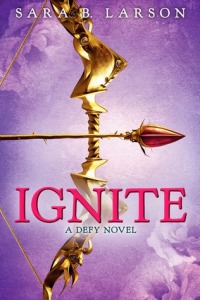 though, so I continued, comparisons and memories of my favorite series as a kid, the Protector of the Small, racing through my head.

That nonsense stopped at Chapter Four, at which point I was completely absorbed, all traces of Alanna and regret gone from my mind. Alexa was nothing like Alanna, and her story was no different. The only similarity was the whole posing at a boy shtick. I read Defy and its sequel, Ignite, in less than two days. I literally sat on the couch Sunday afternoon and started (and finished) Ignite in one sitting.

It’s no secret: I love fantasy. My favorite kind of fantasy books are the ones that sweep you up and off into their world, a trait that these books certainly possess. Though several “twists” were very predictable (and the instalove was a little bit nauseating at times),  I truly enjoyed these books and can’t wait for the third to be released.

For starters, the characters were fantastic. Though some (IE, Alexa and Damian) were more complex than others (IE, Jealous Rylan), I enjoyed getting to know their strengths and weaknesses. The worldbuilding was fantastic as well, and I could clearly picture the palace set in the middle of a dark jungle. The magic concept was also good, though I hope it’s fleshed out a little more in the third book.

If you’re looking for a quick, easy fantasy read that will keep you turning the page, look no further! I rated both books 5/5 on Goodreads.