You’ve probably noticed that I’ve been a little MIA lately and it’s been all about Lauren and her vast amount of reading (and our first giveaway!!!) but I ACED MY FINALS, so I have good reason. I’ve gotten a little reading under my belt though, and now winter break has commenced, so hopefully you’ll be seeing a little more of me – for at least the next month.

Before the intense studying began, I decided to read The Andy Cohen Diaries by, you guessed it, Andy Cohen. You might not know this about me, but I have a huge guilty pleasure – reality TV. My husband actually calls it horrible reality TV and just doesn’t understand my love for it but I get sucked in to almost every Real Housewives show (minus Miami) and practically anything on Bravo or E! in general, actually… 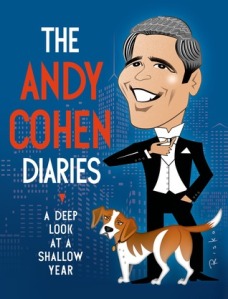 So, when Andy Cohen (the executive producer of the Housewives shows and host of all the Housewives reunions) came out with a new book, I knew I had to read it. It was touted as having inside scoop and tons of name dropping, “a deep look at a shallow year,” and I couldn’t resist. I tried to read his last book, Most Talkative, but I felt like there was a huge disconnect. He’s quite a bit older than me, and a gay man, so I didn’t understand a lot of the pop culture references from when he was coming up in the industry and I didn’t connect with a lot of what he went through.

Anyway, The Andy Cohen Diaries is totally different! It was literally a diary of one entire year of his life (I think he missed one day of the entire 365) so it’s pretty long. At one point, about three quarters of the way through, I was getting a little tired of it. There is DEFINITELY a lot of name dropping and a lot of details. It’s fast paced and you have to be paying attention to every entry, you can’t skip around and expect to know what’s happening from month to month. There are a lot of people involved and a lot of things going on, he’ll say one thing in, for instance, January and come back to it again in June. It’s weird because even though I was getting almost bored with it around the Spring entries, by the end of the Summer entries I really didn’t want it to end.

I wish that everyone did this. It’s such an interesting way to get a glimpse into someone’s life and to see what they’re actually thinking and what their personalities are actually like. I really did love reading it, but I rated it 4/5 on Goodreads. It just seemed so repetitive, which I understand life can be, but it was as if even he was getting a little bored. I would LOVE to see this type of book from other “celebrities” and highly recommend it if you’re into the Real Housewives (so much juicy gossip on them, even though a lot of it you have to guess who he’s referring to).