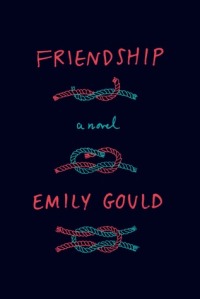 I wanted to so desperately to like this book. Love it, even.

So when I read the Goodreads summary for Friendship, I thought I’d hit the emotional jackpot:

Bev Tunney and Amy Schein have been best friends for years; now, at thirty, they’re at a crossroads. Bev is a Midwestern striver still mourning a years-old romantic catastrophe. Amy is an East Coast princess whose luck and charm have too long allowed her to cruise through life. Bev is stuck in circumstances that would have barely passed for bohemian in her mid-twenties: temping, living with roommates, drowning in student-loan debt. Amy is still riding the tailwinds of her early success, but her habit of burning bridges is finally catching up to her. And now Bev is pregnant.

As Bev and Amy are dragged, kicking and screaming, into real adulthood, they have to face the possibility that growing up might mean growing apart.

So, in my mind, I read that as two grown women who are best friends and eventually learn that growing up may mean growing apart…and that’s ok.

That was not the case when I read these 233 pages of obnoxious, childish bullshit that went down between Bev and Amy.

I would have put the book down, but two things stopped me: one, I actually really enjoyed Gould’s writing style, and two, I suffered through 90 pages before finally considering putting it down, only to realize I was almost halfway finished. Her writing style and the need to review won out.

I was irritated for the rest of the book. For being thirty years old, these women are ridiculously childish and stupid when it comes to life and common sense.

Right of the bat, Bev has unprotected sex during a one night stand, and calls Amy the next morning, asking if she should use the Plan B pill. She doesn’t really want to spend the cash on it, though, so she risks it. And the craziest thing happens: she gets pregnant?!

That’s only the beginning of a string of ridiculous decisions that these girls make. The ending was the most infuriating part of the book, though, as they reconcile their differences with two heart emoticons. Gag.

Three out of five on Goodreads, just because I do like Gould’s writing and hate the plot. I wouldn’t recommend the book to anyone, but I would try reading another one of Gould’s books.

One thought on “Friendship by Emily Gould”