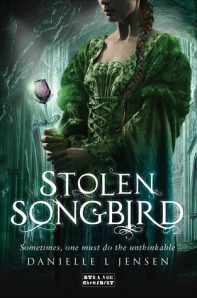 I chose this book on a whim after reading several other third installments in trilogies I’ve been reading. Without checking the publish date, I tore into the book, turning pages like it would disappear if I set it down.

Needless to say, it was a fabulous read. It flew by in a blur of magic, trolls (which are a magical creature I haven’t seen in the pages of a book outside of Harry Potter or LOTR), and loooove.

When I read the summary, I was a little bit weirded out by the concept of a troll-human love story. Again, remember those HP/LOTR trolls? I was not down with that. But Jensen’s trolls are hotties (minus the inbred mutant ones). These trolls are also super smart and don’t follow girls into bathrooms with clubs.

I was also a little nervous to read yet another kidnapped-girl-falls-in-love-with-captor type of story. They’re very overdone, and the whole Stockholm Syndrome thing gets a little weird. This was very, very different. Cecile, our protagonist, is kidnapped and taken to the underground troll kingdom in hopes that she will help fulfill the prophecy by marrying the troll prince.

It’s dark. It’s dangerous. It’s complex. The world is cleverly built, and the characters are complex. I’m not sure what the time period is—at first, I thought it was set in France because of the names of the mortals in the beginning, but nothing was ever outright said. I know some people have an issue with not knowing where the story is taking place (fictitious world or based on our world) or the time period (medieval ages, etc), but that didn’t bother me in the slightest.

I absolutely loved this book, and was devastated when I went to find the second…it won’t publish until Spring 2015. I am very excited for the next installment—5/5 on Goodreads!